The Middle East Film & Comic Con (MEFCC) is one of the most popular events in the Middle East, attracting thousands of nerd culture enthusiasts to partake in a ton of fun activities, cosplay, tournaments, and also meet some of their favorite film and TV celebrities. MEFCC is upon us once again from April 6-8, 2017, and to save you some time, here’s all the cool stuff you will be able to see and enjoy at the convention in one quick list. 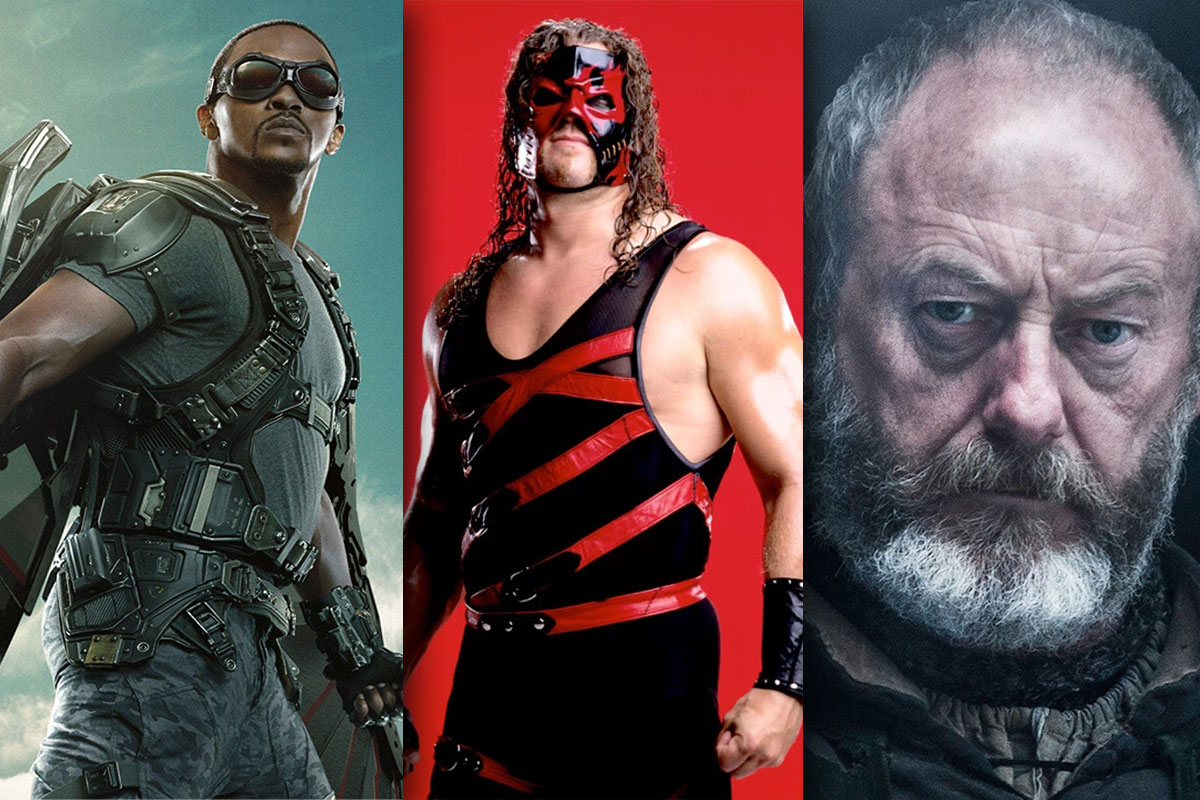 Photo and signing session with celebrities will be held on Friday and Saturday. They start from 12pm onwards both days.

MEFCC will be host to a multitude of international and regional artists who will be performing live on stage at the show. You will be able to enjoy musical performances from bands like the UAE-based rock group Carl & The Reda Mafia and Chronicles of Khan, and solo performances from Megatronic, Naser Mestarihi, Nawafsama, Hamza 3ssam, Nick Marzock, DJ Cory, and more. Also performing will be stand-up comedians Ali Al Sayed and Mina Liccione.

No convention is ever complete without a cosplay competition. MEFCC has always attracted some of the top talent from the region, who bring stunning recreation of their favorite costumes from movies, tv shows, video games and books. Even if you are not participating, do make some time to watch all the cosplayers in action.

If you are looking forward to meeting any of the celebrities, make sure to attend the discussion panels as its a great way to know your favorite stars further, interact with them, and ask them any burning question you have about their on-screen characters or future projects.

Here’s what the schedule looks like for all three days: 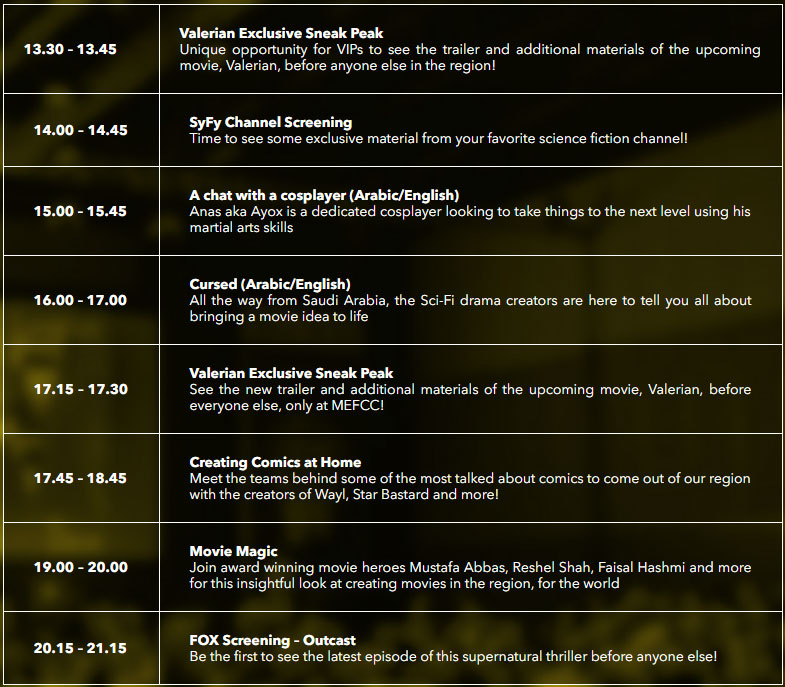 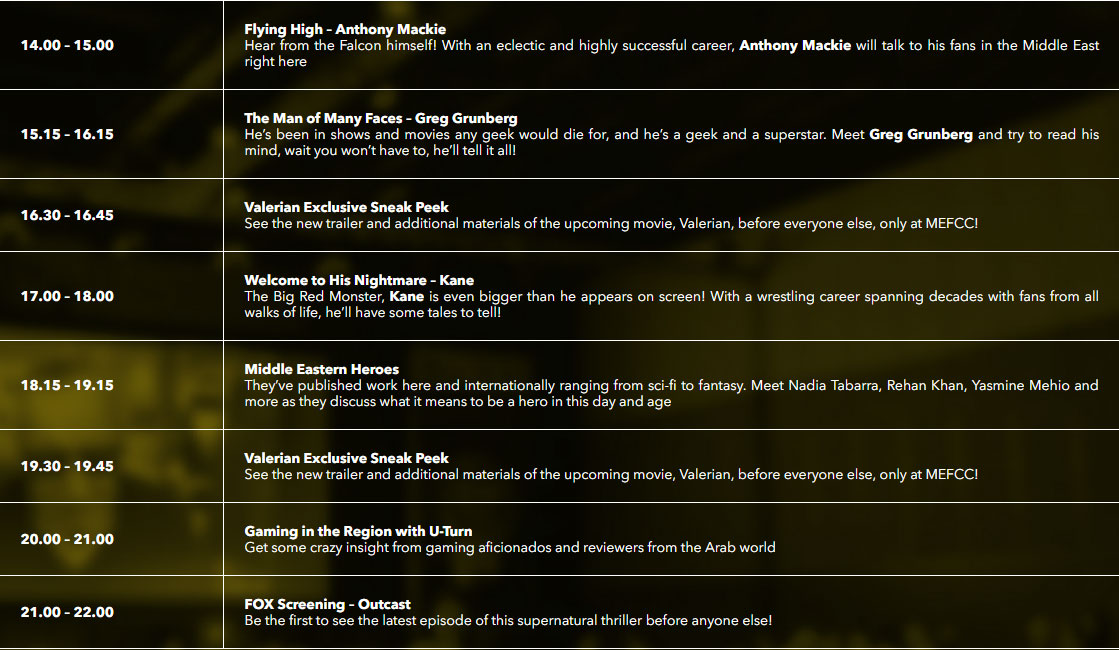 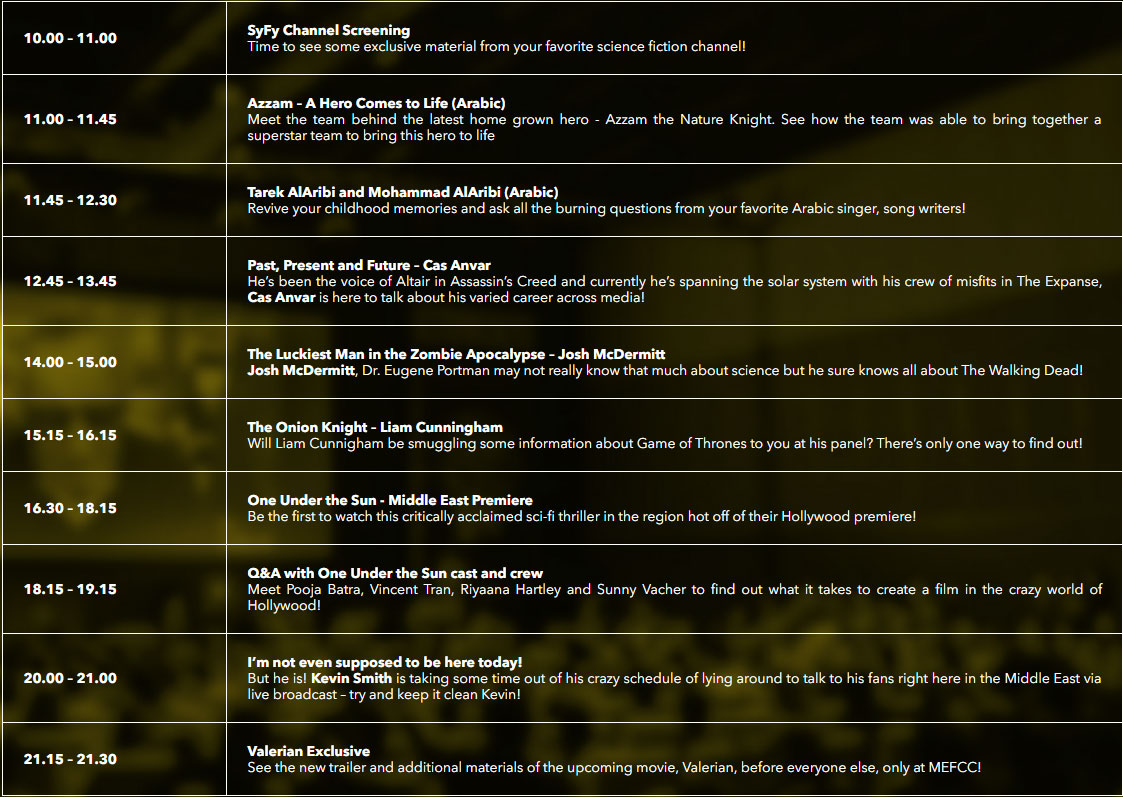 Workshops are a great way enhance your skills in art, filmmaking, cosplay, acting, and more by learning directly from the best talents from the industry. MEFCC will have two workshop rooms that will run sessions almost the entire day. Here’s what the schedule looks like: 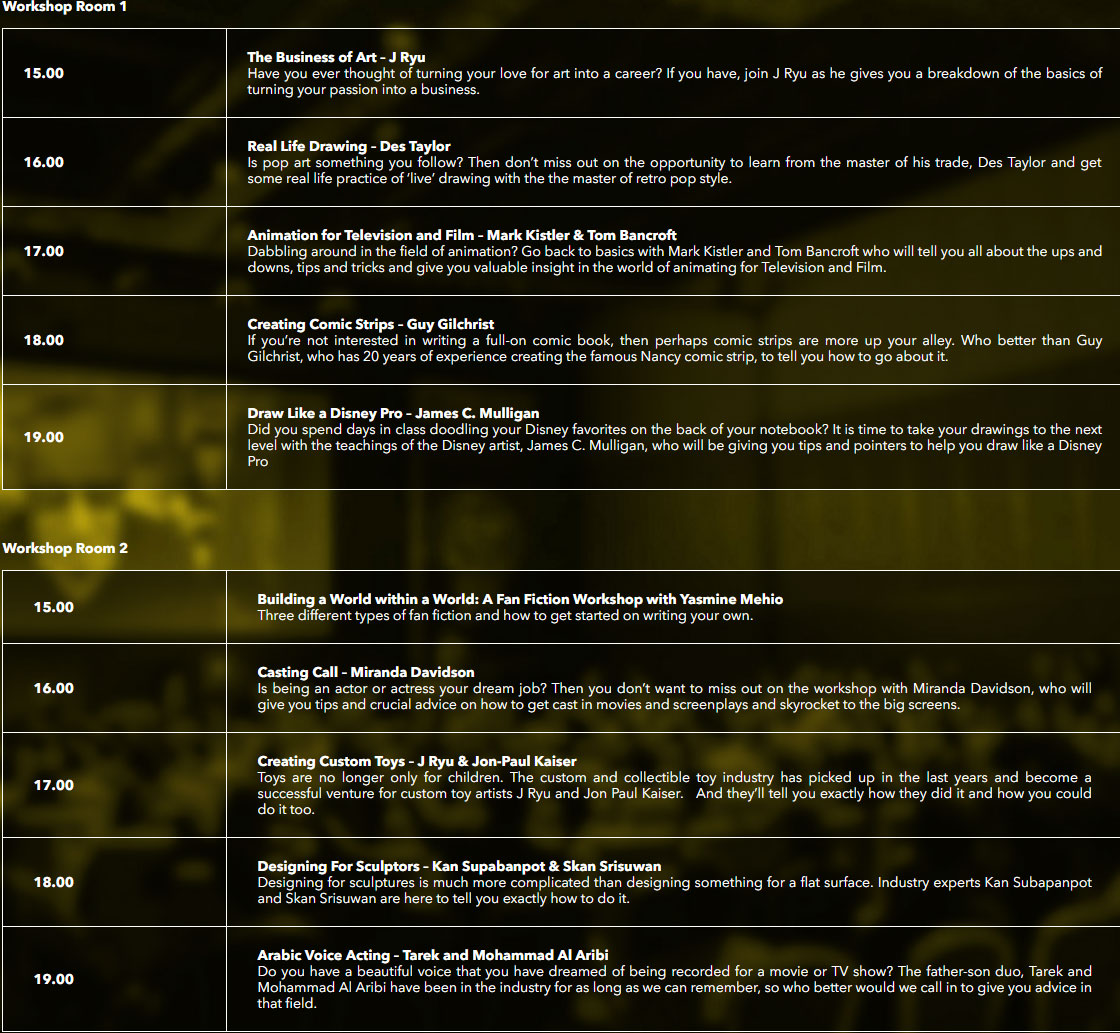 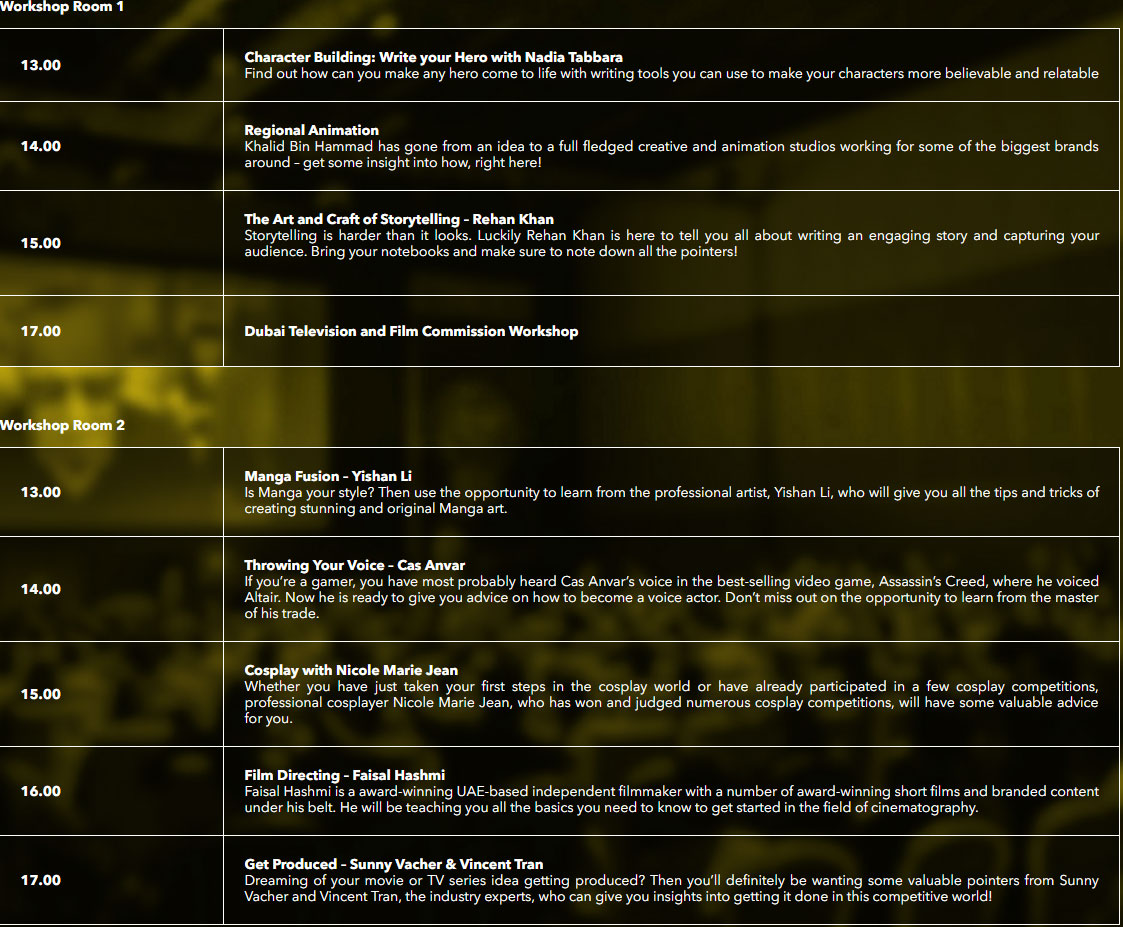 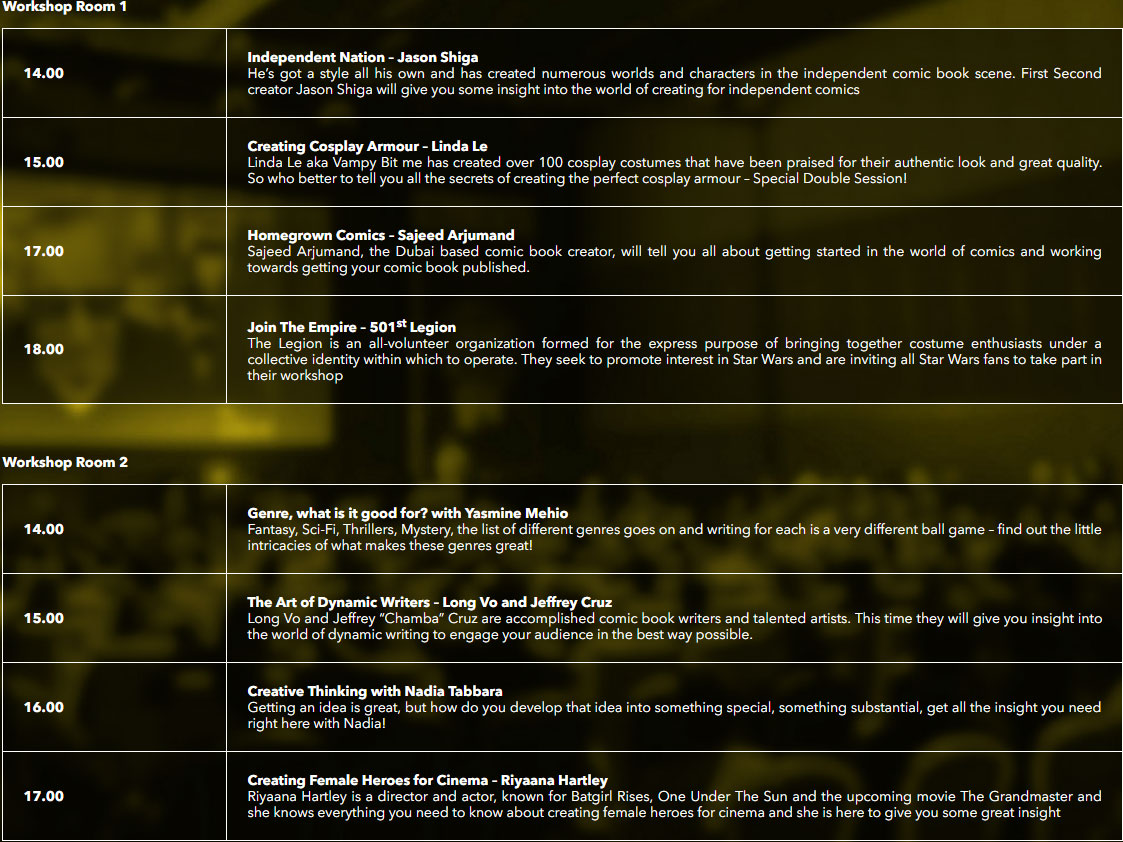 Get your competitive fix by participating in the numerous Esports tournaments hosted at the MEFCC. The highlight of this year is the Overwatch 6v6 PLG Nationals tournament which has a total cash prize of AED 10,000 up for grabs.

This year, MEFCC is bringing the ‘Star Trek: 50 Artists. 50 Years Exhibit’, an exclusive traveling art exhibit that features Star Trek-inspired works by 50 artists, including one by the late Leonard Nimoy, who played the iconic Spock in the famous sci-fi series.

In addition to that, there will also be a fully sized Dodgeball court where you will be able to create your own team and compete for the top prize and the MEFCC Dodgeball Cup. The competition will be judged by film artists Missi Pyle and Jamal Duff.

There will also be a zip line and a retro gaming area for your thrill seeking and video gaming needs.

Lots and Lots to Buy

Make sure to bring a trolley* because you will need it. MEFCC’s showfloor will packed with some of the biggest brands in the region selling their wares at attractive prices. You will be able to grab comic books, figurines, toys, t-shirts, apparel, gaming hardware and lots more. On top of this, you also have the Artist Alley where local talent will sell some incredible hand crafted goodies that cannot be found anywhere else.

*Don’t actually bring a trolley. I am not even sure if that’s allowed.

Attending a show like MEFCC needs a bit of preparation. Make sure you are wearing something comfortable so you can move about easily and in minimum pain (there will be lots and lots of walking). Summer is here, so expect the showfloor to be hot and sweaty, so make sure you are carrying a towel, water and snacks to keep you going. Also, we do recommend packing in a hand sanitizer – trust us, you will need it. We also do not recommend moving about with a bulging backpack as it will make movements extremely restricted in crammed areas.

We highly recommend buying tickets online to save some time in the queue and for a more pleasant check-in process. Of course, if you want to live life on the edge, you can always buy it at the counter as well.

The Middle East Film & Comic Con will be held at the Dubai World Trade Center, as always. We recommend catching the metro instead of driving down as parking space will run out within minutes.

You can unsubscribe anytime